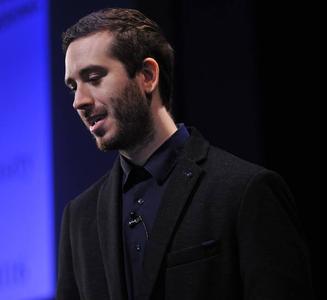 Jared A. Frank was born in Yonkers, NY, on January 25, 1988. He earned a Bachelor of Science degree in Mechanical Engineering from the (then) Polytechnic University in 2010, graduating Summa Cum Laude and as a member of the Tau Beta Pi engineering honor society. In December 2012, Mr. Frank earned a Master of Science degree in Mechanical Engineering from the (then) Polytechnic Institute of New York University, having researched multimodal mobile applications for intuitive human-machine interaction and having served as instructor of the Automatic Control laboratory course in the Department of Mechanical and Aerospace Engineering. In September 2012, Frank began pursuing a Ph.D. in Mechanical Engineering, conducting his research in human-machine and human-robot interaction in the Mechatronics, Robotics, and Control Laboratory. During his time as a Ph.D. candidate, Frank's studies have been funded in part by NASA/NY Space Grant Consortium, Robotics 5 Fellowship, and NSF Research Experiences for Teachers (RET) program. In 2016, Frank received an open innovation grant from the Verizon/NYC Media Lab Connected Futures Research and Prototyping Challenge. Furthermore, Frank's doctoral research was the first prize winner of the inaugural, second, and third NYU School of Engineering Research Expo in 2013, 2014, and 2015, respectively. During this time, he was a member of the IEEE Robotics and Automation Society, served as a peer reviewer for several scientific conferences and journals, and obtained a patent on universal interfaces for the field of construction robotics. In September 2017, Frank completed his doctoral research and began a career in industry as an R&D Sensor System Engineer with Siemens Wind Power (now known as Siemens Gamesa Renewable Energy), developing sensor fault detection and sensor data fusion solutions for their fleet of wind turbines.